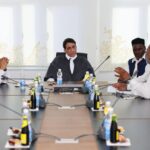 Mohamed al-Menfi, chairman of Libya’s Presidential Council, arrived in the city of Tawergha on Saturday where he met with social and political leaders in order to promote the council’s national reconciliation project.

Al-Menfi timed his visit to coincide with the Islamic Eid Al-Adha holiday as he was photographed performing the Eid prayers in a local mosque in the city.

According to a statement by the council, al-Menfi met with members of Tawergha’s Municipal Council as well as other political and social leaders. Both sides discussed the city’s “needs in various areas”.

The 46-year-old chairman “affirmed his support for the city and the people of Tawergha, adding that it is an integral part of the national reconciliation project that the Presidential Council seeks to implement to bridge the rift and achieve peace among all Libyans.”