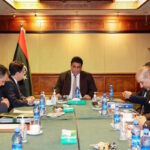 The Libyan Presidential Council (PC) said Saturday that Morocco agreed to withdraw in favor of Libya regarding its candidacy for membership of the African Union Presidency.

The Council explained that this consensus came after its president, Mohamed al-Menfi, met with Moroccan Foreign Minister, Nasser Bourita, on the sidelines of the annual summit of the African Union held in the Ethiopian capital, Addis Ababa.

The Council indicated that this coordination comes within the framework of the exchange of support and the distinguished relations between Libya and Morocco.

Al-Menfi arrived in the Ethiopian capital on Friday to participate in the African Union two-day summit sessions.