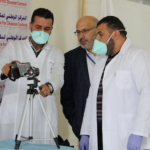 The Libyan National Center for Disease Control (NCDC) announced Monday that it has stopped publishing the daily statistics of COVID-19 new cases, indicating that it would be satisfied with a weekly bulletin issued starting next Saturday.

Last Saturday, NCDC confirmed in its weekly report the improvement of the epidemiological situation in Libya in light of a record decrease in the number of cases, explaining that this was due to the stability of the indicator of the number of cases at (0.76) at the end of this week and its stability under (1) for more than two consecutive months, which is considered an indication of the stabilization of the epidemiological situation.

The epidemiological report indicated that the weekly rate of positive cases continued to drop to 7%, coinciding with the decrease in the number of tests, pointing to the slowdown in the spread of the disease in society. In addition, the death rate stabilized to record 1.34, in line with the pattern of the fourth wave.

He stressed that all Libyan regions are classified at the second epidemiological level, which is an indicator of the country’s exit from the fourth wave, “but this does not necessarily mean the end of the pandemic, especially with the low percentage of people vaccinated with two doses (16% only), which is not enough to limit the spread of the disease again.”