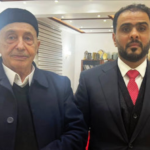 Osama Hammad, Minister of Finance and Planning in the Libyan new government said Sunday that the draft general budget for the current year will be ready for the next two days.

Hammad added, after his meeting with Parliament Speaker Aqila Saleh in the city of al-Qubba that the draft budget will include the support of the Electoral Commission to implement electoral entitlements as soon as possible.

The Minister of Finance confirmed that the draft budget includes support for the National Oil Corporation (NOC), localization of treatment inside and support for hospitals and oncology centers.