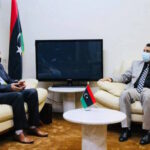 Director General of the Libyan Center for Removing Mines and Remnants of War, Muhammed al-Turgoman, confirmed that the coastal road – Misrata-Sirte is free of mines and remnants of war, noting that the coastal area still needs more surveying in the waters.

Turgoman was received on Tuesday by the Minister of State for the Displaced Affairs and Human Rights, Ahmed Abu Khuzam, where they discussed, in a meeting at the Cabinet Office, the Center’s work mechanism and the efforts it is making in the field of removing mines and remnants of war from populated areas that witnessed clashes during the war, according to the Libyan News Agency (LANA).

0 0
Previous : HoR postpones budget vote until after Eid holidays
Next : Demonstrators in Bayda demand elections be held on time