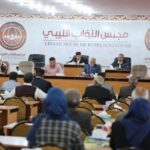 Libya’s House of Representatives (HoR) postponed on Tuesday the vote on the government’s proposed budget until the end of Eid Adha holiday (from July 19th to 23rd), the House spokesman Abdullah Blehaq announced.

According to Blehaq, the postponement came to ensure the necessary quorum (120 votes) is available for the state budget bill.

0 0
Previous : Libyan parliament kicks off another round of budget talks
Next : Official: Libya Coastal Road free of mines and war remnants