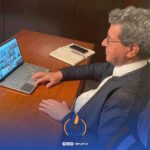 The statement pointed out that Libya’s Governor at OPEC, Mustafa Abdullah bin Issa, would be the alternative chairman of the Board of Governors, according to the OPEC Charter.