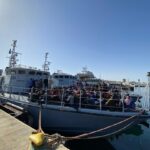 More than 800 migrants were intercepted and returned to Libya between the 11th and 17th of this month, said spokeswoman of the International Organization of Migration (IOM) on Friday.

“Of more than 24,000 people intercepted this year,” stated Safa Msehli via Twitter. “Roughly 6,000 are in arbitrary detention.”

According to the IOM spokeswoman, the majority of migrants are unaccounted for.

More than 800 migrants were intercepted this week and returned to #Libya by the coast guard and coastal security.

Of more than 24,000 people intercepted this year, roughly 6,000 are in arbitrary detention.

The majority are unaccounted for. pic.twitter.com/2NfM3KiJnR