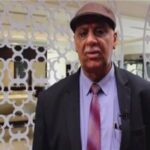 Media Adviser to the Presidency of the Libyan House of Representatives, Fathi al-Marimi, confirmed that Parliament has an intention to continue with the road map, stressing that the Libyan state is free, independent and sovereign.

Al-Marimi said, in press statements: “We base our work on the constitutional declaration, and the road map became a part of it after the approval of the 12th constitutional amendment that took place in the presence of the High State Council.”