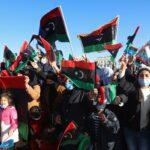 A number of parliamentary candidates as well as political and civil society activists in Benghazi released a joint statement on Saturday, which they announced their rejection of any postponement to the presidential elections on December 24.

In the statement, they warned against “an attempt to circumvent the clear will of the Libyan people to end the ten-year-long transitional period”.

They blamed the international community, the U.N. Mission in Libya, the parliament, the government, the High Council of State and the High National Election Commission (HNEC) for “the repercussions of this stage and the political vacuum and chaos that may result”.

They also threatened escalation and civil disobedience if the elections were not held on time.

0 0
Previous : UN Advisor meets with Haftar and Dbeibeh as presidential cadidates
Next : 726 new people test positive for Coronavirus, 9 others dead in Libya