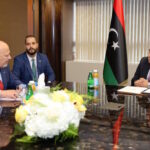 According to a brief statement by the Presidential Council, this came on the sidelines of the 77th regular session of the United Nations General Assembly in New York.

PC President, during his speech before UN General Assembly, said that the Libyan people proved to the world that they are one fabric, cohesive as their land and their common destiny.

He added that the individual interests of the countries involved in the Libyan issue, proxy wars, and conflicting visions about the solution in Libya did not give the opportunity for the national option to be formed.

0 0
Previous : On Iternational Day of Peace, UN express its commitment to advance peace and elections in Libya
Next : Journalist appeals to European rights court to seek transparency on Libya anti-migrant funds