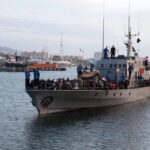 Italian journalist Sara Creta has appealed to the European Court of Human Rights (ECHR) to learn how Italian and EU public funds are used by the Libyan forces that intercept migrants. Italy’s highest administrative court had rejected her request, according to InfoMigrants Website.

Italian freelance journalist Sara Creta has filed an appeal at the European Court of Human Rights with the help of the legal team of the Italian NGO Association for Juridical Studies on Immigration (ASGI). Her request: To get access to detailed information on how Italian and European Union money transferred to Tripoli authorities is used.

Creta said on Twitter that she had filed the appeal because “the right to know cannot be denied”.

#Libya I have lodged an appeal before the European Court of Human Rights @ECHR_CEDH to enforce Article 10 of the ECHR Convention. https://t.co/kq5ZIMkhhM

In October 2020, the journalist had reportedly first requested information from the Italian interior ministry on the use of funds allocated to Libyan authorities, according to a statement published by ASGI announcing the appeal on Monday (September 19).