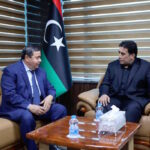 The meeting discussed ways to get out of the political impasse to ensure stability and the establishment of the state, PC Media Office said in a statement.

During the meeting, it was emphasized to support dialogue and the path of consensus between the House of Representatives and the High Council of State, in order to reach a constitutional basis that would produce parliamentary and presidential elections as soon as possible.

PC President affirmed his support for the independence of the judiciary and keeping it away from political quarrels, according to the Media Office.