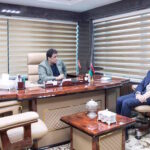 Head of the Libyan Presidential Council, Mohamed al-Menfi, met on Sunday with the Economy Minister, Mohamed al-Huwaij, “to discuss ways to support national economy and expand the horizons of economic work based on well-studied strategic plans,” according to the Council’s Media Office.

The meeting touched on the importance of diversifying sources of income and providing various investments in many sectors, in order to spare the state from absolute dependence on oil and gas, the Media Office said in a statement.

They also discussed reviewing current investment projects, studying the extent of achieving their economic feasibility, proposing targeted investment projects, and providing the necessary studies for the development of the national economy, according to national and international economic indicators, and working to attract investors from national and international private sectors, it added.