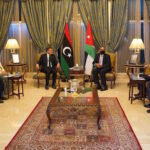 Prime Minister of the Libyan Government of National Unity (GNU), Abdul Hamid Dbeibeh, discussed on Sunday with the Jordanian Prime Minister, Bisher al-Khasawneh, the file of Libya’s debts in health field, which have not been addressed and paid to Jordan for several years, according to GNU Media Office.

The two ministers held an expanded working session at the Jordanian Cabinet Office in Amman, in the presence of the ministerial delegation accompanying Dbeibeh and a number of ministers from the Jordanian side, the Media Office said in a statement.

The two parties coordinated during the session on the establishment of an exhibition of Jordanian products in Tripoli, and holding a meeting of Libyan and Jordanian businessmen on the sidelines of the exhibition, it added.

It was also agreed to discuss cooperation in the field of education and training through a visit of the Libyan Ministers of Higher and Technical Education to Jordan, according to GNU Media Office.