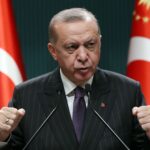 Turkish President Recep Tayyip Erdogan said on Sunday that he does not rule out the possibility of signing a deal with the Taliban, similar to a deal he signed with Libya’s former Government of National Accord (GNA).

“I cannot say that we cannot conclude an agreement with the Taliban similar to the one we signed with Libya. We only need to find a descent partner for talks. If we find such a negotiator, why not sign such a deal? The main thing for us is to solve the problem,” Erdogan told reporters after he was asked about Taliban’s proposal for Ankara to manage the Kabul airport.

In 2019, the former Libyan government, under Fayez Al-Sarraj, signed a military deal with Turkey, which allowed Ankara to deploy its troops as well as Syrian mercenaries to Libya.