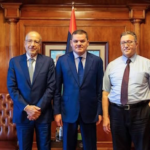 Abdel Hamid Dbiebeh, Prime Minister of the Government of National Unity, called Thursday on the Governor of the Central Bank of Libya (CBL), Siddiq al-Kabir, and his deputy, Ali al-Hibri, to discard differences, whatever they were, and to think of a new stage in which all administrative bodies in the country would be unified.

The Prime minister held a meeting with the two CBL officials today in the Cabinet office, where he also called on them to “hold a meeting now inside CBL, and to start working from this moment,” according to a statement by the Prime Minister’s media office on its official Facebook page.