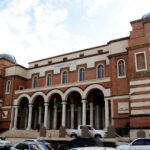 MP: Libyan people have the right to see the international review report of CBL

Parliament Member, Abdel Salam Nassiya, said the Libyan people have the right to see the international review report of the Central Bank of Libya (CBL).

“Concealing the report is considered one of the biggest crimes of disinformation in modern times,” Nassiya tweeted.

It is noteworthy that CBL Governor, Siddiq al-Kabir, had received the review report of CBL in an expanded meeting with the Presidential Council, which included the President and members of the Council, the Prime Minister of the Government of National Unity, the Head of the United Nations Support Mission in Libya (UNSMIL) and his accompanying delegation, Deputy Governor of CBL, along with representatives of the United Nations Office for Project Services (UNOPS) and Dell Company.

0 0
Previous : Prime Minister calls on CBL Governor and his deputy to discard differences
Next : School suspended in Misrata due to COVID-19 outbreak