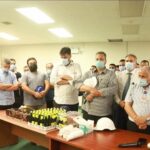 The Ras Lanuf Oil and Gas Company has resumed production in the Polyethylene Plant after a year and half of closure, announced the National Oil Corporation (NOC) on Tuesday.

Mustafa Sanalla, the NOC chairman, spoke on the phone with his counterpart at the Ras Lanuf Company, Shabaan Bseebsu, to congratulate him and the company’s employees on the resumption of the Polyethylene Plant, NOC said in a statement.

“The NOC Chairman also stated that the company has previously stumbled due to circumstances beyond everyone’s control,” the corporation said. “However, as production resumes, the employees’ conditions will improve on all levels, including training, services, and such.”

Sanalla confirmed that, with the continuation of production and the introduction of revenues to the state treasury, the company will get the full support of the NOC.

0 0
Previous : Presidential Council calls on HoR and HSC to agree on constitutional base for elections – Spox
Next : Le Drian to chair Security Council meeting on Libya this Thursday