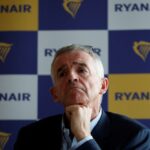 Ryanair in talks to expand into Egypt and Libya, CEO says

Europe’s largest airline by passenger numbers, Ryanair, is in talks with authorities in Egypt and Libya about operating flights to the countries for the first time, Chief Executive Michael O’Leary said on Tuesday.

Ryanair’s only flights outside of Europe currently are to and from Morocco, Israel and Jordan.

Its Hungary-based rival Wizz, which flies to Egypt and Morocco, has also been expanding aggressively into the Middle East, flying 36 routes from Abu Dhabi on its Wizz Air Abu Dhabi joint venture.

“We’re talking to the Egyptians, the Libyans,” O’Leary told a Eurocontrol event, without giving any more details.

O’Leary added that Ryanair would be the first airline to return to Ukraine when it is safe to do so. Ryanair was one of the largest foreign airlines in Ukraine before it suspended all of its flights following Russia’s invasion in February.

0 0
Previous : Over 20,000 migrants taken back to Libya since start of 2022, IOM
Next : NOC authorizes reactivation of Ras Lanuf ethylene plant