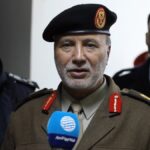 Source: Al-Juwaili asks for peaceful handover of power in meeting with pro-Dbeibeh forces

The center of discussion was Libya’s premiership which is in limbo due to rivalry between Fathi Bashagha, who was appointed by parliament to replace Dbeibeh, and the latter who refuses to relinquish power.

Al-Juwaili, who backs Bashagha, told the armed groups that Dbeibeh must leave office peacefully to “spare Tripoli the war and loss”, according to the source, who requested anonymity for safety concerns. The source noted that most armed groups “did not appear to be strongly attached to Dbeibeh”.

The meeting reportedly ended without a final agreement, which led Al-Juwaili to request another meeting with other armed forces from Tripoli and Misurata to “come up with a unanimous opinion against the government of Abdul Hamid Dbeibeh”.

The source noted that two of the biggest armed groups in Tripoli, the Deterrence Force (Radaa) and the 444th Brigade, did not attend the meeting as they distant themselves from Dbeibeh and claimed to be “neutral”.