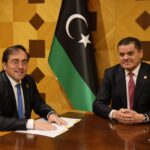 José Manuel Albares, the Foreign Minister of Spain, held separate talks with Prime Minister Abdul Hamid Dbeibeh and Deputy Chairman of the Presidential Council Abdullah Al-Lafi on the margins of an international conference hosted by the Libyan government in Tripoli today.

During his meeting with Dbeibeh, Albares expressed support for “the efforts of the Government of National Unity, as well as support for the outcomes of the Stability conference,” according to brief statement by the Libyan government.

Albares underscored that Libya’s security is part of the security of the Mediterranean basin during his talks with Al-Lafi, as stated by the council’s press release on the meeting.

The two also agreed to enhance bilateral relations between the two countries, the council said.

0 0
Previous : Mangoush affirms support for elections as Libya wraps up conference
Next : Egypt’s Shoukry in Benghazi for meeting with Haftar