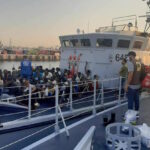 GNU Coast Guard intercepts 172 migrants on their way to Europe

The Libyan Coast Guard under the Government of National Unity has intercepted on Tuesday 172 migrants of several African nationalities, who were on their way to European shores on two boats, according a statement.

Two boats of the Coast Guard moved to the location after receiving a distress call, where they intercepted the migrants and transferred them to Tripoli Naval Base, and from there to the Anti-Illegal Migration Agency, which will take care of them and complete their deportation procedures, said a statement by the Navy Official Spokesman on Wednesday.