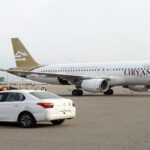 Domestic flights between Tripoli and other Libyan cities based in the east have resumed after more than a two-week halt, Tripoli’s Mitiga Airport.

In a press statement, Ben Shaaban, a media official at the airport, said that flights between both sides will scheduled and conducted starting on Wednesday, March 23.

Government of outgoing premier Abdul Hamid Dbeibeh has order the halt of domestic flights over two weeks ago; a move which was condemned by inter international parties including the U.N. and the U.S.