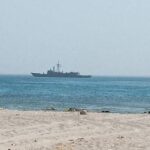 KHOMS – A Turkish frigate has arrived on Tuesday in the naval military base of the coastal city of Khoms, east of Tripoli.

Since 2019, Turkey established a military presence in western Libya with its forces currently occupying several bases in the country, most notably al-Watiya Air Base, one of the largest bases in North Africa and the region.