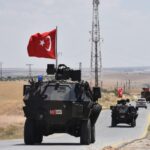 According to sources of 218 TV channel, Turkish officers entered Bani Walid a few days ago, taking advantage of the operations carried out by the 444th Brigade, under the command of Mahmoud Hamza, which operates without any authorization from any security apparatus in the country.

The installing of the system comes amid Ankara’s fears of the Libyan National Army (LNA), which is conducting a security operation in southern and southern-western Libya.

Neither the government nor the Presidential Council has any knowledge of the Turkish officers’ movement in Bani Walid, the sources said.