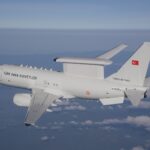 A Turkish AWACS Boeing E-7T (13-004) of the Turkish Air Force was spotted over the coast of Tripoli, carrying out a surveillance mission on Thursday between 1 PM to 2 PM (Libya time), according to media reports.

The plane was reportedly using jamming techniques to avoid boing intercepted. The Turkish military aircraft is believed to be a logistical mission in support of a possible naval movement of a Turkish TCG-class frigate and a Turkish helicopter between the frigate and Mitiga base.