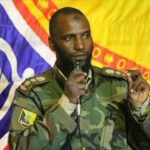 Al-Zuway confirmed, on his official Facebook page on Sunday, the death of the crew of one of the two helicopters, while the crew of the other plane survived.

He explained that the collision took place during a military mission, leading to the death of Brigadier General Pilot Bouzaid al-Barasi, and Corporal Technician Milad al-Asaibi, who are from Benina Air Base.