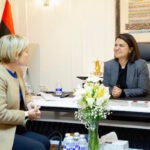 The British Ambassador to Libya, Caroline Hurndall, affirmed her country’s full support for the Government of National Unity (GNU), headed by Abdel Hamid Dbeibeh, and its Foreign Ministry, in their efforts to promote stability in all parts of Libya.

This came in a statement by GNU Foreign Ministry about the meeting of the Minister, Najla al-Manqoush, with Hurndall on Tuesday at the Ministry’s headquarters in Tripoli.

The Foreign Ministry said that the meeting dealt with the latest developments in Libya and the challenges facing the political process in the country.

It added that the minister discussed the existing bilateral relations between the two friendly countries and ways to enhance cooperation in various fields of interest to Libya and the United Kingdom.

On Monday, the British ambassador announced her return to work in Libya, about a month after she had angered a large segment of Libyans, following a statement in which she demanded that the current government continue to perform its duties until the new elections date.

Libyan activists on social media launched a hashtag calling for the expulsion of the British ambassador from Libya. They considered that the embassy’s statement was a violation of Libyan sovereignty, and an obstruction to the road map.

The Foreign Affairs Committee of the Libyan House of Representatives (HoR) also expressed its condemnation of the statement issued by the United Kingdom’s embassy in Libya on the twenty-fourth of December 2021, which it considered “unacceptable interference in the internal Libyan affairs.”