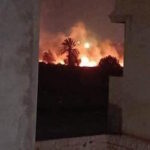 Several sources confirmed that the clashes erupted after an attack by a militia known as the Stabilization Support Force led by Bouzeriba on Criminal Investigation Apparatus militia led by al-Far.

The sources indicated that two cars belonging to al-Far militia were burned.

0 0
Previous : OPEC+ expected to raise oil production by 432,000 barrels per day
Next : IOM: 114 deaths and 436 losses among migrants crossing Med from Libya to Europe in 4 months