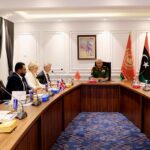 According to a statement by the Tripoli-based General Staff, meeting was attended by the British ambassador, Caroline Hurndall, and the military attache of the British Ministry of Defense to Libya.

Thee delegation reportedly affirmed its support to the Libyan army, and that “the United Kingdom would have a role in unifying the Libyan military institution.”

As per the statement, the delegation discussed ways of joint cooperation between Libya and Britain in combating terrorism, and providing  training experience to the naval forces.