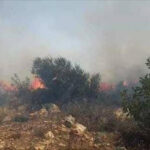 Cyrenaica | A number of towns of the Green Mountain in Cyrenaica, Libya, have been witnessing wildfires due to the heat wave that continues to hit Libya since week.

Local sources reported that the fires have covered tens of hectares since Wednesday noon near the city of Ain Mara, between Al-Bayda and Derna, while the fires continued in the Sidi Khaled area, as local authorities still struggle to to control it.

The local sources confirmed that fire crews are unable to put out the fires due to the lack of needed equipment, since the area extending from Shahat to the outskirts of Derna does not have a single fire truck.

0 0
Previous : Egypt and Cyprus stress the importance of removing foreign forces from Libya
Next : UNSMIL: LPDF failed to reach constitutional base for December elections