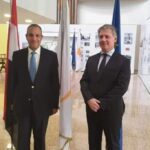 Nicosia, Cyprus | Egypt and Cyprus stressed the importance of removing foreign forces from Libya and ending negative foreign interference in the neighboring country. This came in a meeting between diplomats from Egypt and Cyprus that dealt with relations between the two countries and regional issues.

The Egyptian Foreign Ministry said in a statement today that a meeting in the Cypriot capital, Nicosia, chaired by Egyptian Ambassador Badr Abdel-Aty, Assistant to the Egyptian Foreign Minister for European Affairs, and Ambassador Kornelios S. Korneliou, Permanent Secretary of the Cypriot Ministry of Foreign Affairs, stressed the agreement between Egypt and Cyprus regarding developments in Libya and the necessity of holding elections on schedule and “the importance of removing foreign forces from Libyan territory and the dismantling of armed militias.”

0 0
Previous : 24 LPDF members object to UNSMIL’s actions and call to adhere to December elections
Next : Wildfires in Jabal Akhdar continue as crews struggle for control with no fire truck