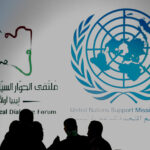 Geneva, Switzerland | Twenty-four members of the Libyan Political Dialogue Forum (LPDF) sent to the UN mission a letter of objection to the course of the Geneva talks and demanded that the elections be completed on December 24 without delay.

The 24 members in their letter, a copy of which was obtained by the Libya, expressed their “surprise at the way the mission and its head handled the dialogue management at the forum and its approach in facilitating the course of the dialogue sessions.”

“Where is the constitutional basis in the Dialogue Committee under discussion in the ongoing meetings in Geneva?” They members asked.

0 0
Previous : Maiteeq: Libyans have the right to choose their president and a new legislative body
Next : Egypt and Cyprus stress the importance of removing foreign forces from Libya