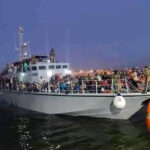 112 migrants intercepted in Mediterranean and returned to Tripoli

The Tripoli-based Coast Guard has intercepted 112 migrants of various African and Arab nationalities, who were attempting to reach European shores on a rubber dinghy.

The migrants were disembarked at the Tripoli Naval Base and then transferred to the Anti-Illegal Migration Agency for completing their procedures and deporting them to their countries, according to the Coast Guard.

0 0
Previous : Libyan and Maltese nationals arrested for moving millions of euros through airport
Next : UNHCR evacuates 93 asylum seekers from Libya to Italy