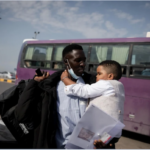 UNHCR, the UN Refugee Agency, evacuated on Thursday 93 asylum seekers to Italy from Libya, “where they had been living in precarious situations with an uncertain future,” according to UNHCR.

This group of evacuees, the first of 500 under a new mechanism for humanitarian admissions, includes children, women at risk, survivors of violence and torture, and people with serious medical conditions, the UN agency said in a statement.

Some were recently released from detention while others had been held in captivity by smuggling or trafficking networks, the statement pointed out.

“We are pleased to see these evacuation flights become a reality and that the Libyan authorities have supported them. They are a lifeline for some of the most vulnerable asylum seekers. Conditions in Libya remain dire for many refugees, and we need the international community’s help to expand similar routes to safety,” said UNHCR’s Chief of Mission in Libya, Jean-Paul Cavalieri.

The asylum seekers left Tripoli on a UNHCR-chartered flight to Rome. In total, five such flights will be organized over one year.

After their arrival, the evacuees will be able to apply for refugee status, which will give them access to safety and security.

Since 2017, UNHCR has evacuated or resettled 6,919 refugees and asylum seekers out of Libya, of which 967 were admitted to Italy, the UN refugee agency said.

0 0
Previous : 112 migrants intercepted in Mediterranean and returned to Tripoli
Next : China CCC discuss its return to work in Benghazi