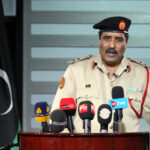 24 ISIS fighters killed during clashes with LNA in Qatrun

24 fighters of the terrorist group ISIS have been killed during three-day long clashes with the Libyan National Army (LNA) in the southern Libya town of Qatrun, announced LNA’s spokesman Ahmed Al-Mismari.

Speaking during a press conference on Friday, Al-Mismari said that one ISIS fighter was arrested and 4 LNA soldiers were reported missing in battle.

He said the army directed its units to “haunt down” the ISIS fighters who escaped the clashes.