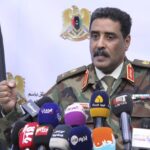 The Libyan National Army (LNA) criticized Prime Minister Abdul Hamid Dbeibeh for failing to acknowledge the army’s role in the clashes against ISIS in Qatrun.

The LNA was battling the terrorist group for three days before announcing victory on Thursday. In a press conference on Friday, LNA’s spokesman Ahmed Al-Mismari revealed that 24 ISIS fighters were killed during the clashes.

In a statement via Twitter, Dbeibeh credited forces of his government’s Interior Ministry for the win against ISIS.

Al-Mismari denounced the premier’s dismissal of LNA’s role and described his statement as “provocative” and “false”.

“Dbeibeh does not even control militia camps [in Tripoli] let alone claim to have control over the situation in the south,” said the LNA spokesman.

Al-Mismari alleged that Dbeibeh’s statement was meant to disrupt the progress that has been made in bridging ties between Libyan military forces in eastern and western of the country.