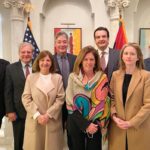 The ambassadors of the United States, France, Germany, Italy, Russia, Turkey and the United Kingdom have expressed their strong support for the efforts of the UN Special Adviser on Libya, Stephanie Williams to facilitate early elections.

This came during a meeting hosted by US Ambassador, Richard Norland, on Friday, in the presence of Williams, where they considered these efforts fulfill the aspirations of 2.5 million Libyan voters, the US embassy tweeted