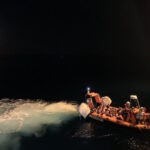 340 migrants rescued in Mediterranean between Wednesday and Thursday, says MSF

340 migrants were rescued in the Mediterranean by the crew of the humanitarian rescue ship Geo Barents in several operations between Wednesday and early Thursday morning. The total number of migrants on the ship is now 458.

The crew of the Geo Barents rescued 237 people from three boats on Wednesday (December 22), Doctors Without Borders (MSF Sea) – the organization operating the ship — said on Twitter. The rescues took place in the span of several hours.

On Thursday, the group tweeted that it had saved another 103 people in two night operations – 27 people including “several children” on Wednesday night, and 76 people (“adults and children”) at around 4 am on Thursday morning.

The ship is now carrying 458 migrants and is waiting to be assigned a port for disembarkation.

In the last hours, MSF teams rescued 237 people from 3 boats in distress. All the survivors are safely onboard the #GeoBarents and are receiving medical assistance.
© @elliddy pic.twitter.com/x9ZRaUnkNo

We've just completed a night rescue of 27 survivors from a small boat after an alert from @alarm_phone.
There are several young children in this group who should never have had to face this ordeal. pic.twitter.com/pCmZdSbwU0

At around 4am this morning, MSF teams brought 76 adults and children to safety off a packed rubber boat. There are 458 people currently on the #GeoBarents. pic.twitter.com/gZ0sER4Lsf