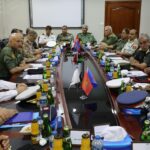 The 5+5 Joint Military Commission has agreed to name a single commander-in-chief for Libyan military after concluding two-days of talks in Tripoli.

The commission, which is composed of military leaders representing rival parties from eastern and western Libya, held a meeting in Tripoli yesterday for the first time since the commission was formed with support from the U.N. Mission in Libya.

After two consecutive days of discussion, members of the commission agreed to “proceed with identifying realistic steps for unification of the military institution,” according to a joint statement released by commission.

The rival military leaders agreed to name a commander-in-chief who will preside over forces from both sides. They also agreed to form committee to handle exchange of prisoners and cases of missing persons.

The commission’s members came to an agreement about coordinating data exchange, bilateral training and joint border patrols to stop smuggling of migrants.

According to the statement, the 5+5 Joint Military Commission will continue to hold meetings for follow-up on the implementation of mutually agreed procedures.