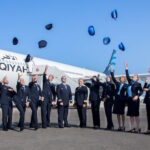 Libyan Afriqiyah Airways has announced it would conduct first flight from Mitiga Airport in Tripoli to Cairo Airport after flight hiatus of about three years.

“Afriqiyah Airways flight No. 8U430 will depart shortly to Cairo International Airport, which will be the first flight after a hiatus of nearly three years,” Afriqiyah said in a statement on Thursday.

0 0
Previous : Egypt renew its demand for unconditional exit of all foreign forces from Libya
Next : HoR, HCS call for international observers to monitor elections