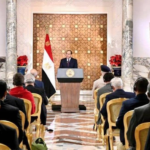 CAIRO – A meeting expected to be held Saturday between the President of the Libyan Presidency Council, Muhammed al-Manfi, the General Commander of the Libyan National Army (LNA), Field Marshal Khalifa Haftar, and the Speaker of the Parliament, Aguila Saleh, on the sidelines of attending opening ceremony of 3 July naval base in Egypt.

Al-Manfi media office announced in a statement that the President accepted the invitation of Egyptian President Abdel Fattah El-Sisi to attend the inauguration of the base, in Jarjoub area of ​​Matrouh Governorate, western Egypt.

Well-informed Libyan sources told Sky News Arabia that Saleh and Haftar will also attend the event, after receiving an invitation from the Egyptian authorities.

0 0
Previous : US Ambassador: Several LPDF members tried to insert “poison pills” to ensure elections will not happen
Next : Marshal Haftar: We will support political solution for elections, and if it fails, we are ready to liberate Tripoli