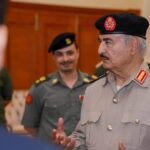 Marshal Haftar: We will support political solution for elections, and if it fails, we are ready to liberate Tripoli

Field Marshal Khalifa Haftar, General Commander of the Libyan National Army (LNA), said they will go with the political solution “until the end drawn in the road map, which is the elections, and if we do not reach a solution, the army is ready once again to liberate Tripoli from militias and criminals.”

“We did not regret not using excessive force to storm Tripoli, in order to preserve the lives and property of our people,” Haftar added in an interview today. He noted that “Libya’s unity and territorial integrity and the exit of the colonizers are red lines that should not be neglected.”

“The militias and terrorists are deluding themselves of a false victory over the armed forces, and the moment of truth will come for them one day soon,” the Libyan commander warned.

“The United States Africa Command (AFRICOM) have targeted our forces at al-Watiya Air Base and in a number of Tripoli fronts,” Haftar revealed.

“The Americans asked the General Command of the Armed Forces to disengage from the Russian ally, and when we asked them for an alternative, they disavowed and unleashed Turkey, AFRICOM, and NATO technologies against our forces.”

On the withdrawal of his forces from western Libya, Haftar said, “the decision to withdraw the armed forces from the Tripoli fronts was a sovereign decision taken by the General Command, and it was one of the difficult choices.”