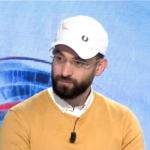 GENEVA – Member of the Libyan Political Dialogue Forum (LPDF), Ahmed al-Sharkasi, said on Saturday that the Prime Minister, Abdel Hamid Dabaiba, entrusted some members in the LPDF to pass the deal of referendum on the constitution in order to obstruct holding elections on December 24.

“What consensus formula is this man talking about? He entrusted interlocutors within the forum to pass the referendum deal, and the goal was to postpone the elections. The prime minister is talking about the elections and working against them at the sametime,” Al-Sharakasi tweeted.

Abdel Hamid Dabaiba had called on “all national parties to give priority to the public interest and to agree on a formula for holding the expected elections on time.”

0 0
Previous : Marshal Haftar: We will support political solution for elections, and if it fails, we are ready to liberate Tripoli
Next : Bashagha rejects attempts by some LPDF members to postpone elections