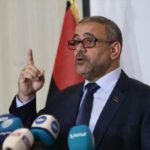 The head of the State Council, Khaled Al-Mashri, has warned the presidents and advisors of the Supreme Court, the Supreme Judicial Council, its members and members of judicial bodies, of “the seriousness of the law establishing the Supreme Constitutional Court in Benghazi.”

In a statement today, Al-Mishri called for the non-implementation of the law issued by the Libyan Parliament, and considered it “invalid and an innocent attempt to involve the Libyan judiciary in political disputes and its impact on the unity of the country.”

0 0
Previous : State Council suspends talks with House of Representatives because of Constitutional Court
Next : Giorgia Meloni: Libya’s stability is an absolute priority of Rome