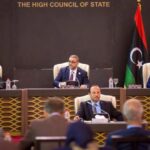 In a statementtoday, 61 members of the State Council called for holding “an urgent session for the Stare Council to respond forcefully to the House of Representatives’ infringement of constitutional judicial powers that violates legislation and laws, and infringes on competences that are not of its business.”

Tags:High Council of StateHouse of Representatives

0 0
Previous : LNA operations to secure Libya’s southern borders continue
Next : Al-Mishri warns of the creation of a constitutional court in Benghazi