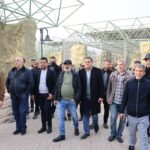 Amnesty International, a human rights organization, has urged the government of Abdul Hamid Dbeibeh to prosecute militias affiliated with the state-funded Stability Support Authority over unlawful killings, arbitrary detentions, interception and subsequent arbitrary detention of migrants, torture, and other crimes.

In a statement released on Wednesday, Amnesty International specifically referred to Abdel Ghani al-Kikli, known as “Gheniwa”, who commands Stability Support Authority. The organization said that was appointed in January 2021 by the former Libyan government of Fayez Al-Sarraj “despite the well-documented history of crimes under international law and other serious human rights violations committed by militias under his command.”

“Legitimizing abusive militia leaders and putting them on state payroll with no questions asked only empowers them to continue trampling on the rights of more people with complete impunity. It can come as no surprise that Abdel Ghani al-Kikli’s new militia is yet again involved in horrific crimes – whether against migrants and refugees or Libyans,” said Diana Eltahawy, Deputy Regional Director for the Middle East and North Africa at Amnesty International.

“For over a decade, militias under his command terrorized people in the Tripoli neighbourhood of Abu Salim through enforced disappearances, torture, unlawful killings and other crimes under international law. He should be investigated and, if there is enough admissible evidence, prosecuted in a fair trial,” Eltahawy added.

Amnesty International said it wrote to the Libyan authorities on the complaints received against Abdel Ghani al-Kikli and his former deputy Lotfi al-Harari on 19 April 2022, demanding their removal from positions that would allow them to commit further violations, interfere in investigations or grant them immunity, pending investigations.

“No response was received in time for publication,” the organization said.