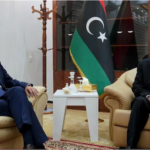 Saleh to hold bilateral talks in Athens on Friday

Saleh’s visit to Greece comes in response to an official invitation by the Speaker of the Greek Parliament, Konstantinos Tasoulas.

Talks of the two parties will include issue of upcoming elections in Libya, bilateral relations between the two countries, as well as developments in the region.