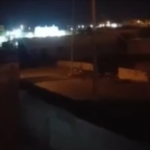 The same sources said the clashes came after people were arrested by an unidentified force near Military Factory 51.

Informed sources in the city indicated that the 444th Brigade had raided dens of human smugglers, which led to armed clashes between the two sides.

It is noteworthy that no official statement has been issued regarding the clashes in the city.